DURANGO, CO – May 28, 2015 — Michael Bergey, the president of the Distributed Wind Energy Association Board, addressed the United States House of Representatives Subcommittee on Energy and Power on May 19 regarding its “Architecture of Abundance” legislation initiative.

Bergey brought forth several sections of the legislation, voicing concerns about a focus on oil and gas supply disruptions instead of a focus on enhancing federal, state, and local capabilities during a grid outage; that the costs of a new transformer reserve were to come from the Energy Efficiency and Renewable Energy program budget at the Department of Energy instead of the DOE Office of Electricity Delivery and Reliability; that unregulated utilities were not covered; that renewable distributed generation was not mentioned; and that the legislation offered a counter-intuitive emphasis on base-load generation. Bergey also praised several aspects of the legislation, including the clarification on streamlined decision-making during critical periods; how the nation’s the nation’s ability to respond to major grid security emergency would be enhanced; and the mandating of considerations affecting grid resiliency at state regulatory agencies and utilities.

Bergey, who is also the president and CEO of Bergey Windpower Co., said,  “I believe the draft legislation has many good and valuable aspects, but I also believe it misses significant opportunities to address emerging reliability and security issues and the plethora of new approaches and solutions made possible by technology innovations in the electric power sector.  In particular, I believe the important role that distributed generation and storage will play in increasing the reliability and resiliency of the power grid deserves more attention.”

In his final remarks to the Subcommittee, Bergey said, “My primary request to this Committee is to bolster Section 1207 to take better advantage of the opportunities that emerging distributed renewable energy, storage, controls, and other grid-enhancing technologies offer today and tomorrow.  If there are legislative opportunities to promote distributed generation beyond this discussion draft I would encourage the Committee to seize those opportunities.  Doing so will help build the American economy while delivering the improvements in energy reliability and security that we’d all like to see.”

Pika recently worked with winemaker Tom Mincarelli , who is located at 3,200 feet above sea level in Black Mountain, North Carolina. He is off-grid with Pika’s T701 wind turbine and B801 Battery Charge Controller. Tom is an installer and has a great site for wind, which is why he’s had turbines for more than 25 years! He has been thrilled with the performance of the Pika T701.
“I’ve lived next to wind generators for more than 25 years and this is the first time I can hear the natural sounds around me.” –Tim Mincarelli 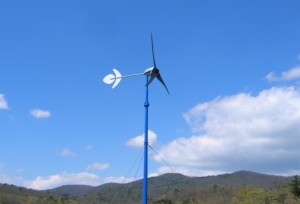