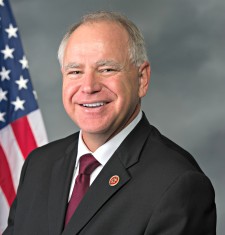 Walz proudly serves the people of southern Minnesota on three committees in the United States House of Representatives:Agriculture, Armed Services, and Veterans’ Affiars. He is the ranking member of the Agriculture Subcommittee on General Farm Commodities and Risk Management. He also is one of nine House Members to serve on the Congressional-Executive Commission on China. Walz serves as co-chair of the Congressional Sportsmen’s Caucus, and has leadership posts with the National Guard and Reserve Caucus and the Congressional Veterans Jobs Caucus. Since coming to Congress, Walz has made improving the care of our nation’s veterans a top priority. The Rochester Post Bulletin has described him as having “relentless energy” and touted his strong work ethic, stating that “he brings a soldier’s work ethic to the House.” Rep. Walz has been recognized for his work in Congress with awards from AMVETS, the National Association of County Veterans Service Officers, the American Cancer Society, the National Association of Development Organizations, the National Farmers Union and the Matthew Shepard Foundation.